Sunglider flying in the stratosphere

The test flight lasted a total 20 hours and 16 minutes, with 5 hours and 38 minutes of them in the stratosphere. The world-class sized UAS not only reached the stratosphere, it successfully completed its flight on a pre-flight battery charge and solar energy during the flight. Sunglider also demonstrated its high-performance capabilities under extremely demanding conditions where wind speeds were greater than 58 knots (approximately 30 meters per second) and temperatures fell as low as -73 degrees Celsius. 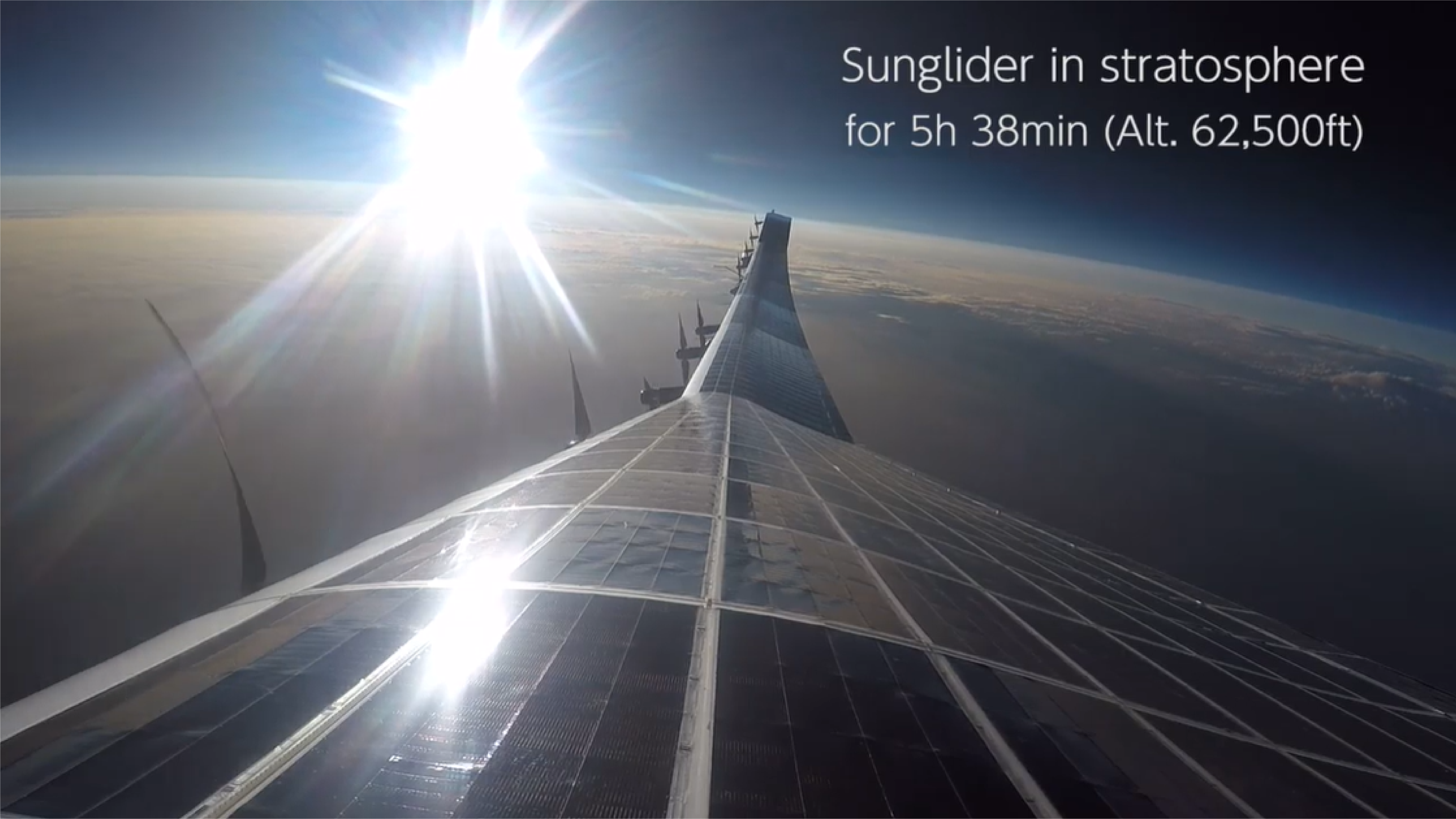 Footage of the test flight can be seen here

In addition to reaching the stratospheric flight milestone, an Internet connectivity test using a communications payload jointly developed with Loon LLC (“Loon”) was successfully performed during the test flight. Using smartphones connected to the Internet through the payload in the stratosphere, members from Loon and AeroVironment successfully made a video call to HAPSMobile members based in Japan. More details on the payload test are in this press release.

The success of this stratospheric test flight is a major step forward for HAPSMobile as it continues to pursue its mission of bridging the digital divide by building its business in the stratosphere, a new frontier for humankind. HAPSMobile will continue to work to revolutionize mobile networks by leveraging HAPS.

Junichi Miyakawa, Representative Director & CTO of SoftBank Corp., and also President & CEO of HAPSMobile, said, “Watching this test flight, I was reminded of ‘Castle in the Sky,’ the anime directed by Hayao Miyazaki in 1986, and how the airship in the story filled me with aspiration. We once again moved one step closer to our goal of building a base station that floats in the sky solely on solar energy. Even though the temperature fell below 73 degrees Celsius, our work on endurance tests bore fruit and resulted in a successful test flight. On the day of the test, Sunglider faced aerial currents of roughly 30 meters per second, so I was relieved when it hit the runway after clearing all test items. In this test flight, we also successfully conducted communications with smartphones on the ground and obtained data for fully automated piloting. While there is still much room for improvement, we will continue to work toward realizing our dream.”

HAPSMobile Inc. is a subsidiary of SoftBank Corp. that plans and operates a High Altitude Platform Station (HAPS) business with the aim of bridging the world’s digital divide. HAPSMobile is primarily engaged in network equipment research and development for the HAPS business, construction of core networks, new business planning and activities for spectrum usage. AeroVironment, Inc. is HAPSMobile’s minority owner and aircraft development partner for “Sunglider,” a solar-powered unmanned aircraft designed for stratospheric telecommunications platform systems that flies approximately 20kms above ground in the stratosphere. HAPSMobile has a strategic relationship with Loon, a subsidiary of Alphabet, the parent company of Google. For more information, please visit https://www.hapsmobile.com.